Welcome to the introduction of my book 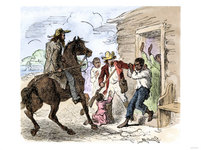 Thomas McCreary was a slave catcher and kidnapper unconcerned for the difference between the two activities. He lived in Cecil County, Maryland, the mid-point between Philadelphia, a refuge for freedom seekers, and Baltimore, a major slave market. McCreary and his community provide a close up view of the toxic effects the debate over slavery had on the country in the years leading up to the Civil War. Slave holders, slave dealers, slave catchers, kidnappers, kidnap victims, free blacks, freedom seekers, furtive Underground Railroad agents, outspoken abolitionists, and ordinary citizens caught up in the violence lived in proximity in the Baltimore - Wilmington - Philadelphia corridor. This volatile mix made the region a hotspot in slavery-related controversies. This after all, is the region of the Christiana affair, the most violent resistance to the Fugitive Slave Act of 1850. The treason trial that followed and the story of Thomas McCreary become intertwined. Historians have noted the connection between the killing of the slaveholder at Christiana and the mysterious death of a witness against McCreary after he kidnapped Rachel Parker. But historians stopped there and overlooked a significant connection between the aftermath of the treason trial, the Fugitive Slave Act of 1850, and the story of Thomas McCreary.

STEALING FREEDOM ALONG THE MASON-DIXON LINE 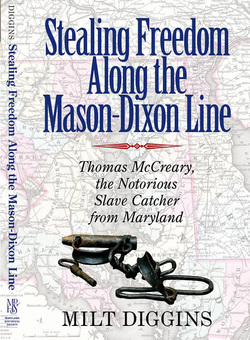 Published by the Maryland Historical Society.

Books are distributed through the Johns Hopkins University Press, and available through Amazon, and other retail outlets.

Historians who had previewed the book offered the following comments for the book jacket:

An extraordinary book – the terrifying tale of real life human hunters who earned their living legally tracking and capturing escaped slaves, and kidnapping free people of color, in the decades leading to the Civil War.  Diggins weaves a compelling narrative of a notorious slave hunter, Thomas McCreary, and others like him, who operated for years along the border between slavery and freedom in Maryland and Pennsylvania.  While white and black abolitionists, escaped slaves, and their free neighbors fought McCreary and others with fists, guns, and through the courts, they discovered that man-hunters like McCreary found much support for their legal and extra-legal activities, even at the cost of innocent lives and the freedom of many more.  A must read!
—Kate Clifford Larson, author of Bound for the Promised Land: Harriet Tubman, Portrait of an American Hero

There is no other Underground Railroad book quite like this excellent study from Milt Diggins.  Stealing Freedom offers the most sophisticated portrait yet crafted about a notorious slave catcher and about the tragic realities of antebellum kidnapping along the Mason-Dixon Line.
—Matthew Pinsker, Director, House Divided Project at Dickinson College

Milt Diggins presents the Mason-Dixon Line as a perpetually shifting boundary between slavery and freedom, a border region in which free people of color as well as fugitive slaves lived in constant danger, and kidnappers often operated with the government’s blessing.
—Carol Wilson, Washington College

"A thorough and thoughtful study those researching the Underground Railroad or the growing conflict between North and South over slavery should have on their bookshelves. We need more books like this."
—Christopher Densmore, Friends Historical Library of Swarthmore College

I am Milt Diggins, M. ed., an independent scholar, author, public historian, and lecturer. I retired after teaching history for most of my thirty-two year career, but my interest in history refused to retire. Freed from the classroom, I expanded and edited the Cecil County (MD) Historical Journal, a publication of the Historical Society of Cecil County, for eight years, and wrote numerous history articles for that publication and a local newspaper. In the summer of 2006 the Maryland Historical Magazine published my article about the political and engineering effort to construct the first railroad bridge across the mouth of the Susquehanna River. In 2008, Arcadia Publishing published my first book, Images of America: Cecil County, a photographic history of the county. In 2014, I researched and wrote about two Underground Railroad sites for the National Park Service's program to verify and designate authentic UGRR sites.

In 2007, I came across an 1851 news article in which Frederick Douglass referred to Thomas McCreary as the "Notorious Elkton Kidnapper." No one at the Historical Society of Cecil County in Elkton ever heard of Thomas McCreary. This sparked my curiosity even further. For seven years I researched multiple sources, organized the story to place it within the context of larger events, established its significance for regional and national history in the run up to Civil War, and wrote numerous drafts before submitting the manuscript to a publisher January, 2014.

More information about the book's contents is on the Stealing Freedom page and the Kidnapping of Elizabeth and Rachel Parker page.

I am scheduling presentations based on topics in my book and on my blog. If you would like to schedule a presentation please refer to the Presentations page.